It seems that as we move into summer, the tick population is growing. With the population growing, the risk of contracting a tick-carried disease increases. There are many different types of ticks. Some may carry certain diseases and some may carry nothing. Knowing the types of ticks, how to remove a tick, and what to do if you have any suspicions are key factors in protecting yourself and your pets from their blood sucking bite. 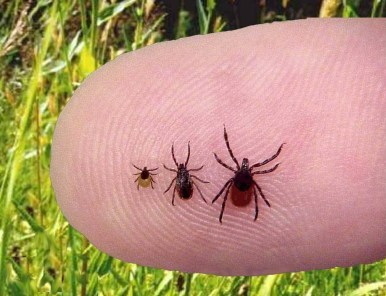 One of the most common types of ticks throughout Illinois includes the Black-legged Tick, also known as the Deer tick. Deer ticks like to lurk in knee-high brush and shrubbery. The female deer tick prefers to attack larger hosts, like deer, but are commonly seen latched onto humans and pets. The male deer tick does not feed on hosts like the female does. This is a blood-orange colored tick with black legs and could possibly carry Lyme disease.

Another tick that may be seen in our area is the American Dog Tick, found east of the Rocky Mountains but more dominant on the east coast. This tick likes dogs as its host, but will also feed on cattle and other larger animals. This reddish-brown tick has grey or silver markings on its back that looks like a shield. This tick has been known to carry vectors that contribute to Rocky Mountain spotted fever.

The Brown Dog Tick is located across the entire United States. This tick is brownish-red in color but has a hexagon shaped body, opposed to a more rounded body of the other ticks. It prefers to feed on dogs, but will feed on a wide variety of mammals. Similar to the American Dog Tick, the Brown Dog Tick has been known to contribute to Rocky Mountain spotted fever.

The Lone Star Tick is easily distinguished by the lone white dot (or star) on its back for females, and several spots or streaks on the back of males.  The Lone Star Tick is not known to carry Lyme disease, but can cause STARI or Southern Tick Associated Rash Illness in its hosts of dogs, cattle, deer, and humans.

How to remove a tick

A tick should be removed with fine tipped tweezers. The tick should be grasped as close to the hosts skin surface as possible. Grasp the tick firmly and pull upward in a fluent motion. Twisting or jerking the tick too quickly could detach the head from the body, rather than removing the entire tick.

If a rash, infection, or illness occurs within a couple weeks of removing a tick your doctor should be contacted for continued treatment. Be sure to inform the doctor that there was a tick bite, where it was, and where the tick most likely got picked up from.

Most ticks are only active between the months of April and September; unfortunately it is during this time that many people venture out to the woods or their favorite fishing hole. During this time it is recommended to avoid areas such as woods, fields, and trails. The brush, tall grass, and shade allow for the perfect area for ticks to be lurking and waiting to attach on to a host for their next meal. When going into areas that would be prone to ticks, the proper preventative measures should be followed, as well as a thorough body search to see if you attracted any of the little bugs.

Using insect repellents that contain 20%-30% DEET can greatly help, all exposed skin & clothing should be sprayed every few hours as directed by the product label. Light colored clothing has been said to be less of an attractant than dark colored clothing. All gear, clothing, people, and pets should be washed and checked immediately, especially the scalp and crevices such as behind the knees and in the arm pits. Clothing should be put into the dryer on a high heat setting for one hour to kill any ticks embedded within it.

Ticks are not restricted to wooded or bushy areas; they can be within the lawn or landscaping as well. Many pet owners treat their pets with monthly flea and tick medicine, but do not consider treating the lawn and landscaping. Monthly pet medicine is good at prevent ticks from biting, but does not necessarily prevent them from hoping on the pet for free ride into the house, where it can attach to humans or untreated indoor pets.

A nuisance pest control is an excellent service that kills all fleas and ticks, as well as over 180 different species of insects such as spiders, ants, roaches within the lawn. Nuisance Pest Control is a pesticide service that is done 3 times per year and each application has a residual of 45 to 60 days depending on the weather conditions. These services have had such great success that many pet owners are able to stop applying monthly medicines to their pets and rely solely on the total lawn pest control.

The blood sucking bite of tick should be taken seriously and proper preventative measures should be used to control the presence around you. If bitten, take a look at the ticks that are removed and try to identify which ones they are, clean the area, and keep a watch for any symptoms of tick carried illnesses.