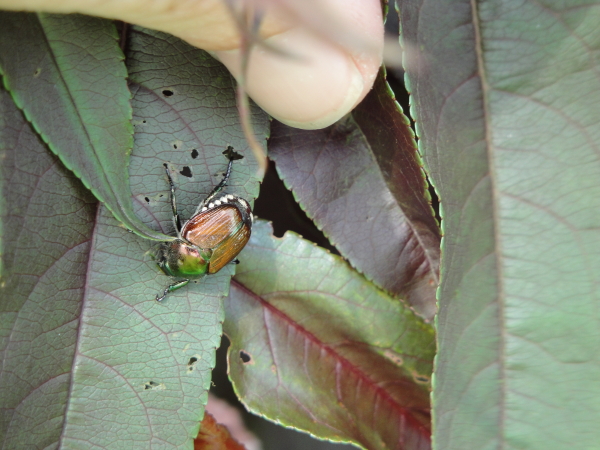 Japanese Beetles begin their life cycle as small white grub worms. In late July, early August – Japanese Beetles return to the ground where a female beetle can lay as many as 60 eggs. The eggs hatch approximately 2 weeks later and the young white grub will feed on the root system within a lawn. As the fall approaches and temperatures begin to drop the white grub will dig deeper into the soil below the frost line. In the spring they will move to the surface of the ground and will feed a little on the root systems again, but they do not cause significant damage at this time of the year. In late spring, early summer they will stop feeding, turn into pupae and then crawl out of the ground as a Japanese beetle, which completes the life cycle.

Once the beetle emerges from the ground, it is ready to eat and mate. Japanese beetles enjoy eating flowers such as roses and can take a toll rather quickly starting with small holes within flower pedals and leaflets, eventually causing death to the entire plants.

During late summer, early fall while in the white grub worm stage, the root system of lawns will be eaten and can cause death to lawn turf. The effects of grub damage will be a dead spot of grass within a regularly healthy lawn and once tugged on will pull up easily. This damaging stage is noticed in lawns from late August through September.

Since Japanese Beetles have two distinctive forms of either being a beetle or a grub worm, we will break down protection and prevention separately.

Japanese Beetles – Mid June through late July landscape plants, shrubs and trees that are susceptible to these damaging insects need to be treated with contact and systemic insecticides. It is also a good practice to rotate insecticide modes of action to prevent tolerance levels.

Grub Worms – June through mid July lawns should have an insecticide applied with a 6 month residual control that will kill any grub worms hatched in August and September as newly born white grubs are vulnerable to insecticides. If you didn’t apply a preventative insecticide in June or July a curative insecticide is available, but the significant damage caused by the white grubs will also need to be repaired typically with new seeding or new sod being laid down.

Not so long ago, Japanese beetle traps were all the rage and everybody had one in their yard to catch these pests. After studies, it has been determined that attracting and trapping these beetles is not recommended. While these traps do capture quite a few beetles, it also attracts quite a few more that find a host plant before finding the trapping system, therefore causing a bigger problem.

Insects, such as Japanese Beetles, can cause substantial damage to trees and shrubs and in the white grub worm stage can cause significant damage to a lawn. An infestation can occur quickly and take the life of the tree or shrub even quicker and can destroy a lawn in as little as a week.

When caring for trees and shrubs, not all trees and shrubs are created equal. Research is the key for each particular plant being worked with. Lawn care services, tree service companies and nurseries are excellent resources to ask questions and get recommendations from.

If you are ever unsure of what to do, how to handle a job, or just too short on time it is best to call a professional to be sure the job is being done correctly. Look around, ask friends or family, and research companies on the Better Business Bureau to find a company that you can trust.