With cooler temperatures in the late fall, throughout winter and into early spring, frost may appear. A cool frosty morning can be a beautiful sight while enjoying a cup of coffee but can cause concern for the lawn and other plant life. 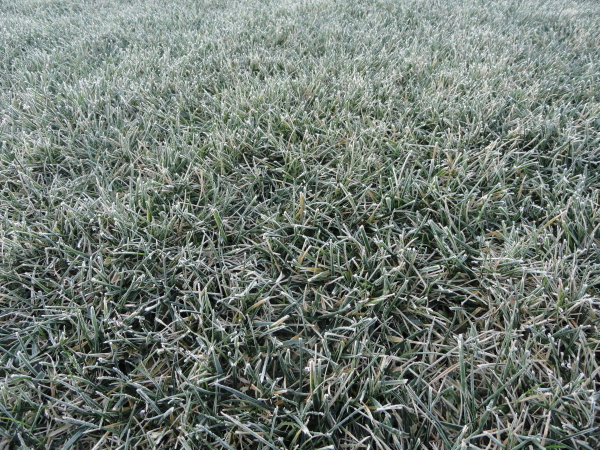 What is Frost?
It is a coating of ice crystals, formed by moisture in the air overnight, among other things. In our area, this ice usually forms as white ice crystals or frozen dew drops on the grounds surface.

What Causes the Ice Crystals?
A lot of meteorology knowledge goes into predicting if a frost will occur because frost depends on the air temperature, the dew point and the barometric pressure. The ice crystals are formed when the dew point is reached under the freezing point; meaning a small amount of humid air is cooled, at a constant barometric pressure, to a temperature so cold that liquid vapor appears on the surface of an object or plant as ice.

This freezing temperature can be reached due to heavy, cold winds blowing across an area quickly, which is called advection-frost or with radiation-type frost which occurs when nights are calm, clear and cool and the ground temperature can gradually drop to below the freezing point. Radiation frost is the most common for our area and the type that typically leads to white layer and icy conditions.

The formation of ice crystals near the ground surface is caused by the airs ability to hold water as a vapor, which is dependent upon its temperature. The higher the air temperature, the more vapors the air can hold. The dew point temperature is the factor that condenses water vapor, turning it into dew, fog or clouds if cooled at constant pressure. The air becomes saturated and cannot hold any more vapors when the air temperature falls to the dew points, at which point any excess moisture is excreted as liquid dew or icy frost.

It’s a cold night, but why didn’t it Frost?
Even when all things are in place, there are other forces that can prohibit the formation of the ice crystals. First of all, if there is a light breeze, cooler air can be continually pushed up & away from the ground’s surface. Cold air needs to be able to pool in a spot continuously to form it and even a slight breeze can eliminate this pool from forming.

Another frost-stopper is the clouds. When it is cloudy in the evening and over night, the atmosphere is “blanketed” meaning the heat is not released from the grounds surface as quickly. When the ground stays warmer for longer, frost is not typically formed.

Why is there a Concern?
One of the biggest concerns is plant harvesting. Some crops can survive a light frost, but many crops have been severely damaged and completely lost when a hard one occurs before the plant is able to be harvested.

Preventing & Treating Frost Damage
Preventing damage in a lawn is fairly easy, stay off of it until it thaws. This, however, can be easier said than done. Should someone or something walk across the lawn and cause footprints, let them go until spring when the growing season begins again. Damaged areas may rebound naturally and require no additional concern; however, if it does not rebound naturally, seeding may be necessary.

To Sum it Up
Frost can be a tricky subject and difficult to predict yet beautiful to look at. Be sure to harvest any crops or bring in any plants if a heavy frost is predicted to prevent damage to them and when a frost does occur, be sure to keep all traffic off the lawn to avoid damage spots.
It is always a good idea to consult with a lawn care professional and ask any questions you may have. Look around, ask friends or family, and research companies on the Better Business Bureau to find a company that you can trust.